Sixty years ago last month, President John F. Kennedy announced the establishment of the Peace Corps, a volunteer service organization through which young Americans work abroad for a period of two years with governments, schools, nonprofit and non-governmental organizations, and entrepreneurs in critical areas such as education, youth development, community health, business, information technology, agriculture, and the environment.

The Peace Corps is based on an idea originally proposed in 1950 by Walter Reuther, president of the United Auto Workers, in an article entitled, “A Proposal for a Total Peace Offensive.”  Reuther argued that the United States should establish a voluntary agency for young Americans to be sent around the world to fulfill humanitarian and development objectives.  “I believe that the more young Americans who are trained to be sent abroad with a slide rule, textbook, and medical kit to help people help themselves with the tools of peace, the fewer young Americans will need to be sent with guns and weapons of war.”

The Peace Corps was established by Executive Order on March 1, 1961 and authorized by Congress on September 22, 1961, with passage of the Peace Corps Act.  Since its establishment, more than 235,000 Americans have served in 141 countries.  The program’s spirit of service and activism represents the very best of America. 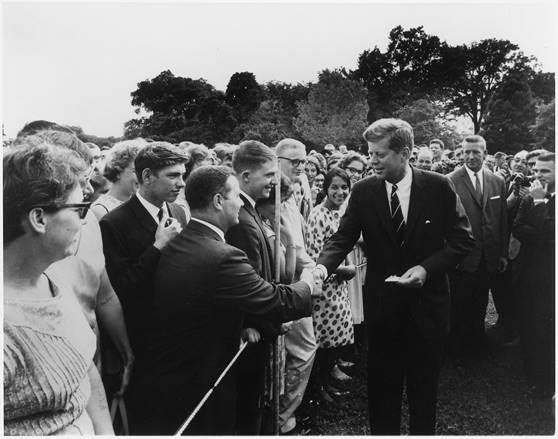 Today, the United States itself is threatened by a number of glaring social-economic challenges, including underemployment and job anxiety; stagnant middle-class wages; wide and worsening income, wealth, and opportunity inequality; persistently high rates of poverty; and, near-record numbers of Americans reliant on government programs like food stamps and disability insurance.  Such problems – and the anger, cynicism, and populism they inspire – have undermined public confidence in corporations and government, led to charges that America’s political and economic system is not only unfair but “rigged,” and threatened the social cohesion and consensus that a thriving democracy requires.  Building a more inclusive and accessible economy – one that “works for everyone” – has emerged as one of America’s most urgent domestic challenges.

Thriving entrepreneurship is an important part of the solution.  Recent research has demonstrated that new businesses – “startups” – account for an outsized portion of the innovations that drive productivity growth and economic growth, and account for virtually all net new job creation.

Echoing President Kennedy’s historic call for volunteer service in the cause of global peace, we encourage President Biden to establish an “Entrepreneurship Corps” to underscore the importance of American entrepreneurship generally and, more specifically, to promote and support entrepreneurship in distressed and underserved communities across America, with a special emphasis on assisting aspiring entrepreneurs of color.  Entrepreneurship Corps recruits should be accomplished college graduates with backgrounds in business, science, technology, engineering, and mathematics who would be assigned to one or more startups in distressed areas to assist in their development and success.  The standard service commitment would be two years.  Participants would earn a reasonable salary paid by the Corps and have transportation costs covered, like other federal government employees.

Like the Peace Corps, the Entrepreneurship Corps would be a prestigious national service experience for young Americans responding to Presidential call to action – one that would deploy an army of high-quality talent across America with the aim of improving socio-economic conditions and expanding opportunity in distressed areas of the nation through the transformative power of entrepreneurship.