The establishment of a bipartisan Entrepreneurship Caucus in both chambers of Congress for the first time is an enormously significant development for American entrepreneurship because caucuses are an important part the policymaking machinery in Washington.

The principal mechanism of policy within the U.S. Congress is the committee.  Since April of 1789, when the House and Senate Rules Committees were established to draft rules of procedure for both legislative chambers, Congress has divided its legislative, oversight, and internal administrative tasks among various committees.  Within assigned subject areas, these subdivisions of Congress gather information and develop expertise, identify policy challenges, hold hearings with expert witnesses, examine and evaluate legislative alternatives, propose solutions, and report measures for the consideration of the full House or Senate.

Generally speaking, legislation cannot reach the floor of the House or Senate for a vote before being examined and voted out of the relevant committee, and, therefore, the committee structure is the principal instrument of power within Congress.  As such, committees are very “turf” conscious and vigorously defend their respective jurisdictions.  In 1961, Congressional scholar George Galloway wrote: “In practice, Congress functions not as a unified institution, but as a collection of semi-autonomous committees that seldom act in unison.”

Something is needed to pull it all together – and that’s the purpose of a caucus.  Congressional Caucuses and other “Congressional Member Organizations” help bring structure, coherence, and consensus to multi-faceted topics like entrepreneurship.  They enable Members of Congress to exchange information and ideas on topics of common interest, participate in events and inquiries, and generally facilitate interactions among Members who might not otherwise have the opportunity to work together.

There are hundreds of caucuses in both the House and Senate.  But, astonishingly, there had never been an active caucus dedicated to entrepreneurship in either the House or Senate – until this year.  Establishment of Entrepreneurship Caucuses was a top priority for CAE when I and my colleagues launched the organization in July of 2017.

And both new Caucuses have already demonstrated their value and potential. 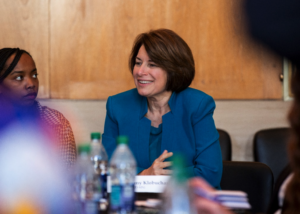 On September 24, 2019, the Center for American Entrepreneurship helped arrange a Women’s Entrepreneurship Roundtable with the Senate Entrepreneurship Caucus.  Twenty-two women entrepreneurs from across the United States traveled to Washington, DC at CAE’s invitation for the two-hour discussion, which focused on the unique issues, challenges, and obstacles that confront women entrepreneurs, and what policymakers can do to help.  Caucus co-chairs Senator Amy Klobuchar (D-MN) and Senator Tim Scott (R-SC) served as hosts, and Wendy Guillies, president and CEO of the Kauffman Foundation, served as moderator.

The roundtable showcased the remarkable talent and innovative capacity of America’s women entrepreneurs – and also their unique needs and vulnerabilities.  In particular, the discussion revealed the critical importance to women entrepreneurs of four “mobility” issues: healthcare, childcare, student debt, and retirement security. 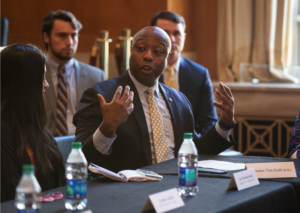 On that same day, September 24, 2019, Senate Entrepreneurship Caucus co-chairs Senator Amy Klobuchar and Senator Tim Scott introduced the Enhancing Entrepreneurship for the 21st Century Act.  The legislation directs the Secretary of Commerce to conduct a two-year analysis of the multi-decade decline in new business formation rates, including likely contributing factors and economic implications.  The analysis will be the most comprehensive ever conducted of the state of American entrepreneurship, bringing to bear all the data and analytic capacities of U.S. government agencies.

On November 1, 2019 – just four weeks after the establishment of the Caucus – the six co-chairs of the new House Entrepreneurship Caucus introduced the Act in the House of Representatives.  In a statement, Caucus co-chair Rep. French Hill said:

“One thing that we know for certain is that small business entrepreneurs and startups are responsible for the majority of new innovation, job creation, and economic growth.  However, as the rate of new business formation continues to decrease, Congress needs comprehensive answers on how to enact pro-growth policies for a 21st century economy.  As an Arkansas entrepreneur and job creator, I know how difficult it can be to get a business off the ground.  Working with entrepreneurs, business leaders, and economists to identify the root causes of the startup slump is a critical step to unleashing a new generation of small business growth.”

The establishment of a new bipartisan Entrepreneurship Caucus in both chambers of Congress – for the first time – creates an unprecedented opportunity to significantly enhance policy circumstances for American entrepreneurs and startups.

CAE thanks the members of both Caucuses for their participation and interest in entrepreneurship, the co-chairs for their leadership, and looks forward to supporting their work in 2020.