In February 2004, Mark Zuckerberg famously launched Facebook from his Harvard dorm room at the age of 19. By that summer, Zuckerberg moved himself and the company to Silicon Valley and never looked back.

Over the next eight years, Facebook would attract half a billion users and nearly $7 billion in venture capital investment, on its way to a May 2012 IPO that valued the company at more than $81 billion. Today, Facebook has more than one billion users and is worth more than $500 billion. Zuckerberg is still CEO, and at 35 years old, has an estimated net worth of $65 billion—making him the eighth richest person in the world.

It’s a fascinating story. So fascinating in fact that Hollywood made a feature film about it called The Social Network. And while the story of Mark Zuckerberg and Facebook has undoubtedly inspired an entire generation of young entrepreneurs and reshaped their imaginations about what’s possible, people too easily forget that a big part of what makes the story compelling is that it’s so unusual. Mark Zuckerburg is not only an outlier—he’s an outlier among outliers.

Researchers have known for a while that peak age for general entrepreneurship occurs around mid-career (mid-30s to mid-40s), but an influential academic study published last year shows just how misguided the popular narrative is that twenty-something tech billionaires are the norm even for high-growth, high-tech entrepreneurship.

Economists Pierre Azoulay, Benjamin Jones, Daniel Kim, and Javier Miranda, analyzed administrative government data on the founders of all U.S. businesses that were started during a recent eight-year period (2007-2014). This restricted-use dataset at the U.S. Census Bureau allowed the researchers to get an accurate and comprehensive view of all business startup activity in America.

The data show that age at the time of company founding more or less follows a normal statistical distribution (“Bell Curve”), with peak founding age across all U.S. companies (blue line) between the late-30s and early-40s. But for the fastest-growing one percent of firms (red line), the founder age curve is pushed out further to the right (older founders), with peak age clustered around the mid-40s. 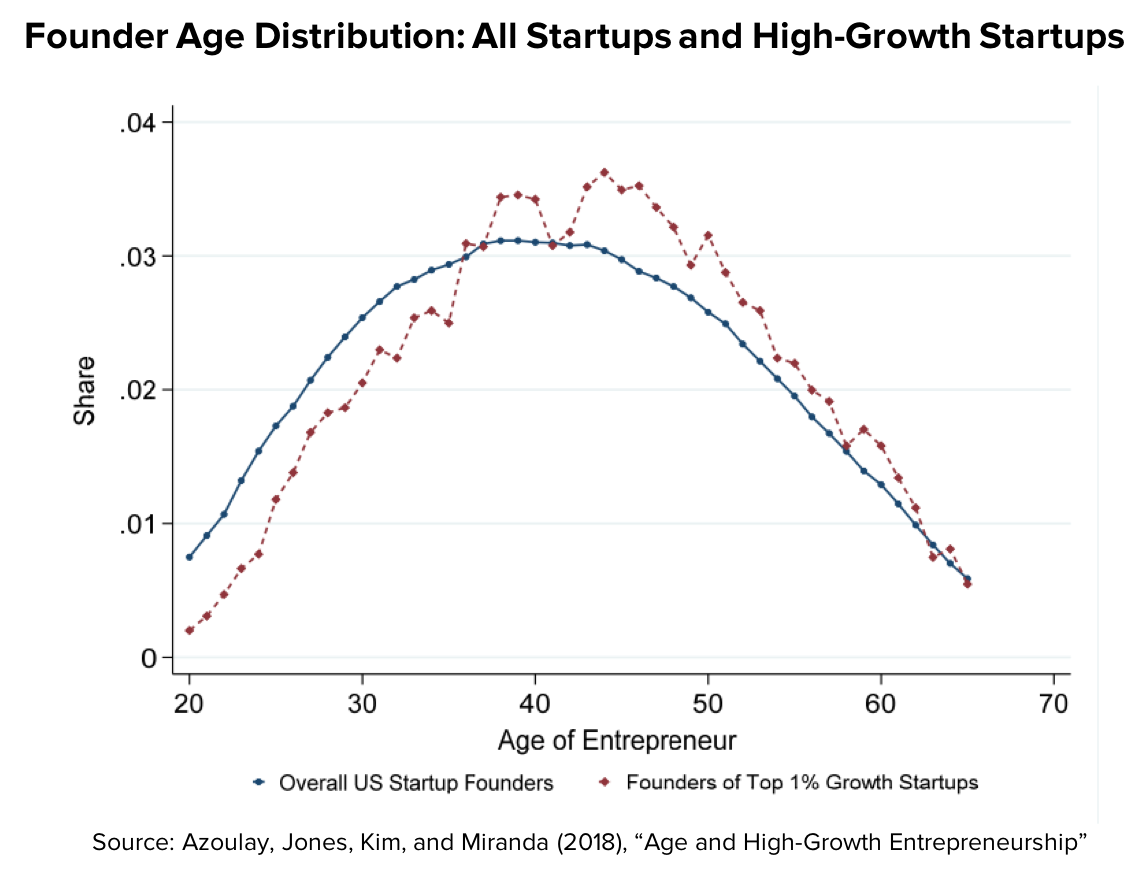 Founders aged in their 20s and 30s are less likely to start high-growth companies compared with their share of total companies founded (red line below the blue line on the lefthand side of the graph). Conversely, founders aged 40 years and above are more likely to start high-growth businesses relative to their contribution of total companies founded (red line above the blue line on the righthand side of the graph).

Next, we see two tables showing average founder age by key geographies (top panel) or success outcome (bottom panel). Each table has four columns, first for all firms and then secondly for three types of technology definitions—the first by industry, the second by venture-capital backing, and the third by patenting. 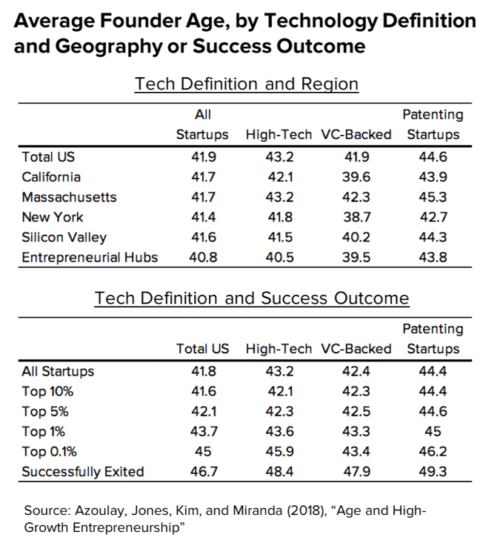 As the data show, the average firm age is pretty similar across these dimensions, with all definitions of high-tech and high-growth startups having higher average founder age than for the benchmark of all firms. One exception is that founders of high-tech and venture-backed firms in Silicon Valley and other key entrepreneurial hubs tend to be slightly younger than founders of all firms in those regions, but the differences are small. Regardless, the average age of these founders is more or less around 40 years of age—far greater than the popular narrative of the mid-20s college dropout.

Finally, the study shows that conditional on starting a company, the probability of achieving “high-success” (fastest growing 0.1% of firms or successful exit) is lowest for founders in their early-20s and increases in a linear fashion along with founder age up to the late-50s. Although the probability of starting a company declines among these older workers, those that do are more likely to succeed. 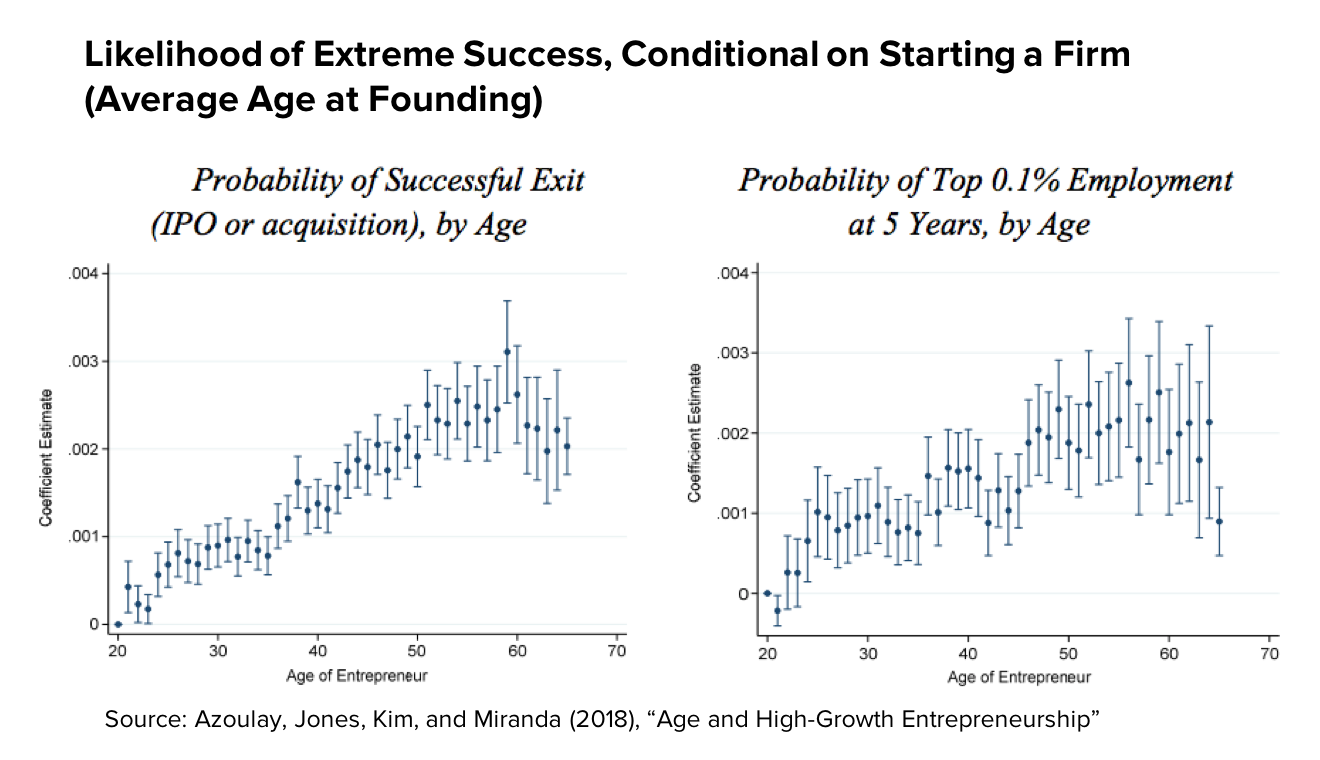 And yes, it’s true there are more outliers (i.e. younger founders of very successful startups) in sectors like software and in leading regions like Silicon Valley, which helps explain some of these small differences. But overall, this work demonstrates that many of the highest-impact companies in the U.S. are started by founders who are much older than the popular narrative suggests.

Instead of succumbing to emotionally appealing but highly misleading mythology about the characteristics of high-growth, high-tech, and high-impact entrepreneurs, know that the most successful of them typically get started much later than you have been lead to believe.