As the U.S. economy continues its uneven recovery from the COVID downturn, entrepreneurship — something for which America is virtually synonymous — offers a promising pathway back to prosperity. Repeated research has demonstrated that new businesses “startups” are disproportionately responsible for the innovations that drive productivity growth and economic growth, and account for virtually all net new job creation.

But there’s a problem: Entrepreneurship in America remains predominately white and male.

Such circumstances are particularly glaring given that research suggests that in recent years people of color may be launching new businesses at higher rates than white entrepreneurs, even as they confront unique challenges, such as access to quality education, experienced mentors and capital to fuel their new businesses.

Given these realities, an important event happened at the U.S. Capitol on Sept. 20. The Senate Entrepreneurship Caucus conducted a roundtable with 17 entrepreneurs of color from across the nation. The roundtable — co-hosted by Sens. Amy Klobuchar (D-Minn), Jerry Moran (R-Kan.) and Ben Ray Luján (D-N.M.) — focused on the unique challenges and barriers that confront U.S. entrepreneurs of color. Also joining the conversation was Don Cravins, confirmed unanimously by the Senate on Aug. 22 as the new undersecretary of commerce for minority business development. 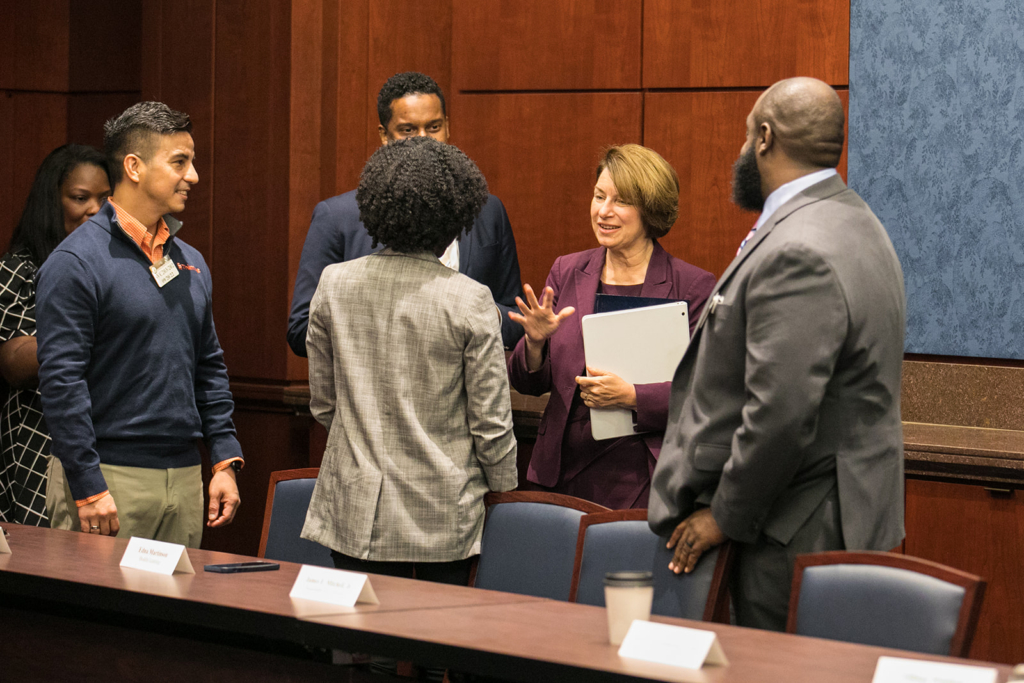 The 17 participating entrepreneurs came from 15 states from New Mexico to Maryland and represented industries from education and apparel to food manufacturing and construction.

Many issues were discussed during the roundtable, most notably, access to capital. One entrepreneur of color shared that though she had raised $5 million for her business in recent years, she still found it nearly impossible to attract venture capital. Another said that it had been difficult to get a $500,000 bank loan even though her company is worth $6 million. Many others related stories of stringent application processes, opaque rules and regulations and unreasonable collateral requirements and guarantees.

Their experiences align with national data. The Joint Center for Political and Economic Studies found that 6 in 10 Black business owners faced challenges securing capital. According to the Federal Reserve, Black entrepreneurs are denied bank loans at twice the rate of white business owners and minority entrepreneurs are far more likely to be denied financing for their businesses. 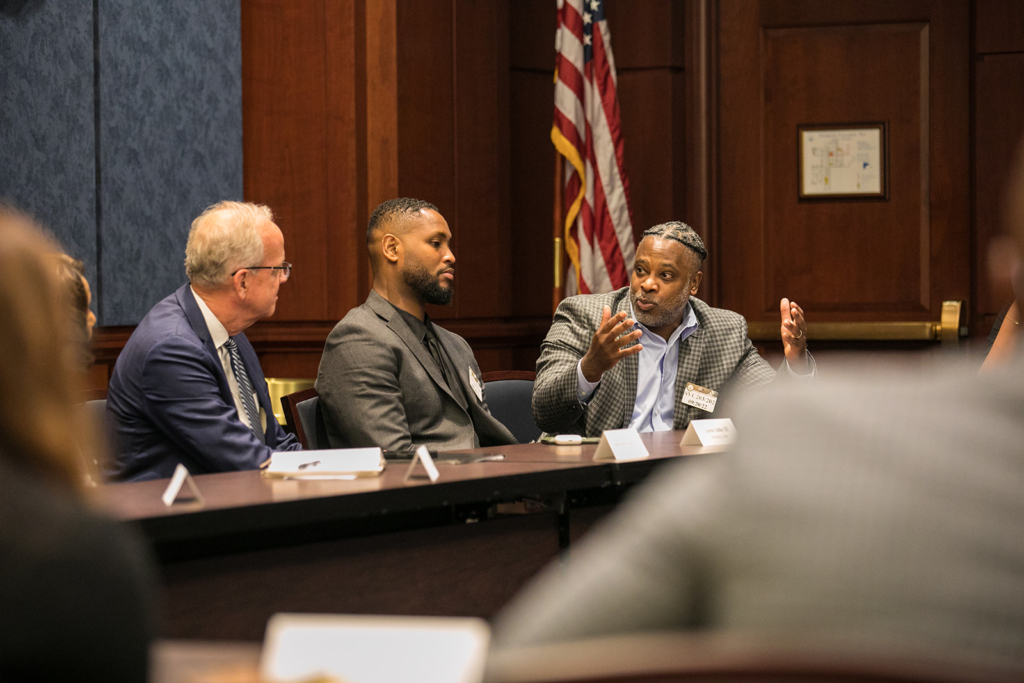 A new report from the Alliance for Entrepreneurial Equity uncovered some of the reasons why diverse business owners have trouble securing the capital they need. The analysis found that the trend of bank branch closures since 2010 has disproportionately affected minority-owned businesses. Diverse business owners also have fewer bank relationships and collateral options, and underwriting criteria are often more stringent for minority applicants.

On March 31, Moran and Sen. Tim Scott (R-S.C.) introduced the Expanding American Entrepreneurship Act, which would amend the Investment Company Act of 1940 in ways designed to get more capital to women founders and entrepreneurs of color.

But capital isn’t the only barrier that entrepreneurs of color confront. There was widespread agreement among roundtable participants regarding the difficulties they experience expanding into new markets. For example, the U.S. government is the largest customer in the world, but procurement procedures and requirements are cumbersome and opaque, requiring many hours of paperwork and preparation from already time-strapped entrepreneurs. For these and other reasons, minority-owned small businesses represent less than 10 percent of federal contract recipients. 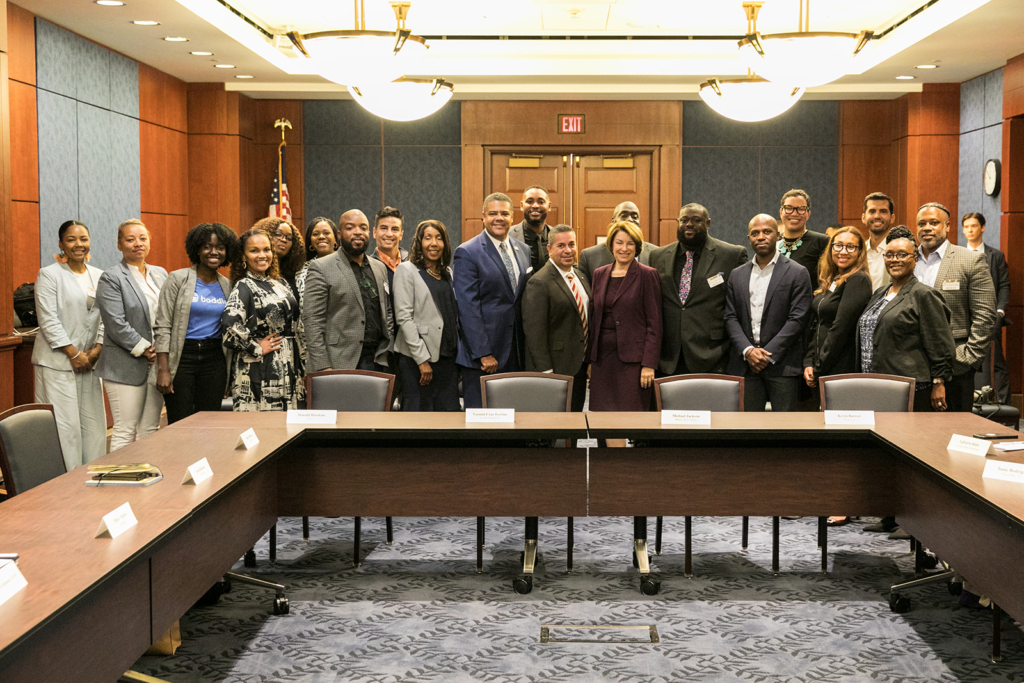 Participants also related difficulties in attracting and retaining skilled talent, as emerging businesses struggle to compete with larger businesses that offer higher initial salaries and comprehensive employee benefits packages. Child care is also a massive barrier to minority entrepreneurs — both for themselves and as they struggle to attract skilled workers.

The roundtable was an important and effective exercise for identifying and discussing the major challenges and barriers confronting entrepreneurs of color — but now, policymakers need to act. And the economic pay-off would be enormous. 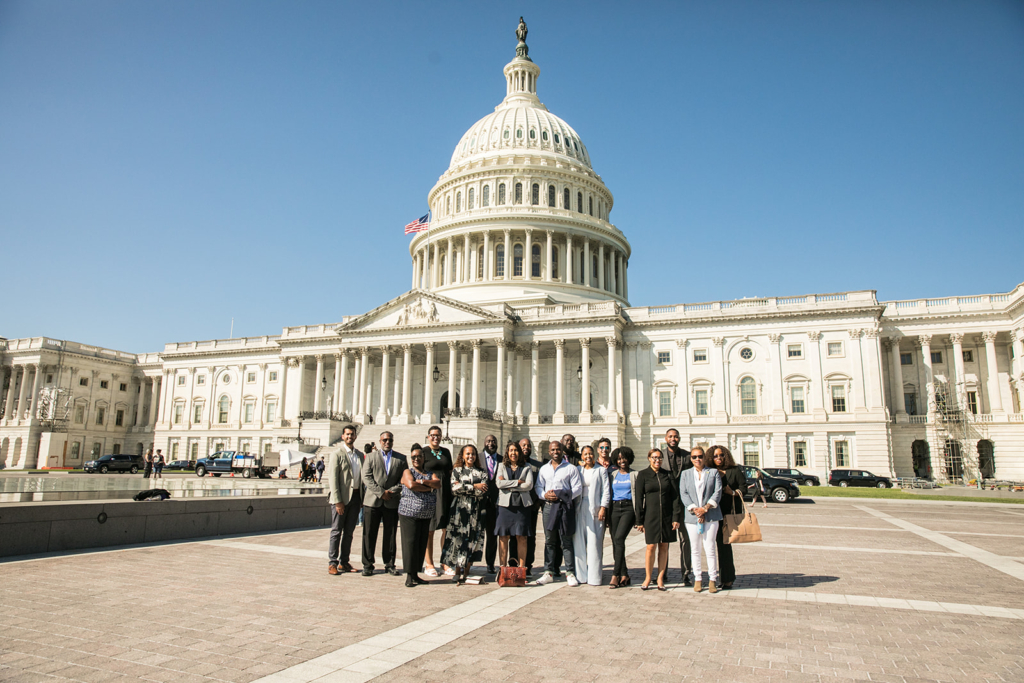 According to research by the Ewing Marion Kauffman Foundation, if Americans of color owned businesses at the same rate as white entrepreneurs, the United States would have more than 1 million additional employer businesses and 9.5 million additional jobs. Relatedly, a recent analysis by Stanford University’s Graduate School of Business concluded that closing the “opportunity gap” between white and Hispanic entrepreneurs would create 5.3 million new jobs and add $1.5 trillion to U.S. GDP annually.

Cravins told entrepreneurs at the roundtable “good faith and hope is not enough.” He’s right.

Entrepreneurs of color need and deserve action from policymakers to ensure that people from all backgrounds and ethnicities can start and scale new businesses.

And the U.S. economy needs their contribution now more than ever.