I was born into a military family.  My father graduated from the Navy’s flight school the day I was born at the Naval Air Station in Corpus Christi, Texas.  My mother pinned the wings on his chest from her hospital room the following day. 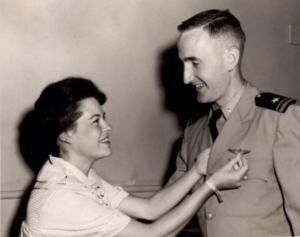 For the next five years my father flew the Lockheed P-3 Orion – a large four-engine turbo-prop anti-submarine and surveillance aircraft with a crew of thirteen – on long 12-hour missions over the Gulf of Tonkin searching for airborne re-supply of the Viet Cong and providing radar and communications platforms for the carrier task force operating in the Gulf.

Over those five years, our young family was based Pensacola, FL, Corpus Christi, TX, Norfolk, VA, and Jacksonville, FL.  My mother spent those years looking after me, my brother Joe (born in 1966), and my brother Jim (born in 1967), and praying for my father’s safety.  Over the course of the war, more than 10,000 U.S. military aircraft were lost and 400 Navy pilots were killed.  When my mother delivered my brother Joe at the Naval Air Station in Jacksonville, the woman in the next bed learned that her husband had been shot down just hours after delivering a baby girl.

Military spouses make an incalculable contribution to the nation by bearing a unique and heavy burden – a burden that extends far beyond long separations, single parenting, and simmering anxiety for the well-being of their deployed spouse.  According to the Department of Defense, each year a third of all military personnel change duty stations, meaning that most military families endure a move every two to four years.  Our young family moved four times in five years.

On the one hand, the nomadic aspect of military life has its appeal – another part of the country or world to explore, new friends to meet, exciting new experiences and opportunities.  But frequent moves also mean interrupted relationships, social uncertainty or isolation, kids pulled out of schools and away from friends, anxiety and adjustment.

Perhaps most problematic, change of duty stations makes holding a job or pursuing a career that matches the education and qualifications of military spouses – 92 percent of whom are women – difficult or even impossible.  The result is staggering unemployment and underemployment.  Surveys of military families reveal that nearly a quarter of military spouses are unemployed and as many as 60 percent experience underemployment – more than seven times the national average, even before the Covid-19 pandemic.

The ramifications of high military spouse unemployment are severe.  Most obviously, under- or unemployment threatens financial security.  In 2018, Blue Star Families’ annual survey of military families reported “financial issues/stress” as the top source of military family anxiety – ranking even higher than spousal separation.  In the same survey, 70 percent of millennial respondents indicated that two incomes are now vital to the family’s well-being.

More fundamentally, under- and unemployment – particularly over long periods – can lead to feelings of unfulfillment, frustration, and resentment among military spouses unable to pursue their own professional goals.  And the risk of such problems is high, given that 80 percent of military spouses are younger than 40, and 45 percent hold a bachelor’s or advanced degree compared to 33 percent among the U.S. population overall.  Career-related unhappiness, in turn, undermines spouses’ satisfaction with the military lifestyle despite profound pride in serving the nation and participating in the military’s mission.

Family finances and the military spouse experience – and their impact on military marriages and families – determine whether a service member stays in or leaves the military.  This is especially true when spouses and service members reach mid-career and begin the period of maximum earning potential.  At a time when the military is seeking to raise retention rates to make up for recruiting shortfalls, the relationship between spousal satisfaction and retention is especially critical.

And, ultimately, military readiness depends on retention.  New service members can always be trained, but training cannot re-supply experience and professional maturity among military ranks.  This reality is especially urgent given the increasing technological sophistication of modern warfare and the associated education, skill, and experience requirements of military personnel.  If the military is to retain its most skilled and seasoned service members, it must find ways to improve the military spouse experience, which includes ensuring that military spouses can enjoy meaningful careers.  Billions are invested annually in training and readiness, but military readiness always begins at home.

Most current military spouse employment programs, such as the Military Spouse Employment Partnership, focus on connecting spouses to existing civilian employment opportunities in their local area of deployment – a reasonable approach in robust labor markets.  But recent research has revealed that 44 percent of military spouses living on or near the largest bases live in areas with depressed labor markets.

Even in robust labor markets, conventional employment is likely limited to a two- to four-year period at most, as another change of duty station again will require a spouse to leave his or her job.  In the context of the military’s itinerant lifestyle, meaningful and impactful employment programs must focus on job mobility and portability as well.

Fortunately, a powerful solution exists, a pathway that offers economic empowerment, financial remuneration, and on terms consistent with the unique needs of military spouses – entrepreneurship.

Launching a business – especially an Internet-based or remote-work business not bound to a particular brick-and-mortar location – offers a unique professional experience that can be pursued without interruption from anywhere in the world.  In addition to potential financial success, entrepreneurship provides a pathway to personal and professional fulfillment, the chance to pursue a long-time interest or idea, to create, to build something new from scratch, to become one’s own boss and potentially an employer of others.  In its inherent flexibility and self-autonomy, entrepreneurship would seem tailor-made for military spouses.

But entrepreneurship is also risky and fraught with challenges.  Research has shown that a third of all startups fail by their second anniversary, half by their fifth.  And to have the best chance of survival, entrepreneurs – especially first-time entrepreneurs – need help.  They need to learn basic business skills, accounting, licensing and regulatory requirements, how to think through and perfect a product or service idea, how to identify and successfully pursue potential customers, how to secure the capital they need, and how (in the world!) to navigate the tax code.  For military spouses managing young families, extended separation from serving spouses, and the challenges of frequent duty station changes, the challenges are all the more daunting.

Moni, CEO of the company, is the owner of Dog Tags and Heels, a public relations and social media agency she runs while her husband, Roy, who has served in the Air Force for 19 years, is stationed at Joint Base McGuire-Dix-Lakehurst in Chesterfield, NJ. She has also created and raised capital for three Military lifestyle apps.

Flossie, the company’s COO, is a serial entrepreneur specializing in e-commerce, marketing strategy, business development, growth, and sales. A meal prep and delivery company she launched in 2015 – Healthy Momma – generated seven-figure revenues within its first year, selling over 500,000 meals, creating more than 100 military spouse jobs, and donating over 10,000 meals to homeless veterans. Her husband, Michael, has served in the Navy Construction Battalions, the “Seabees,” for 18 years and is currently stationed in Port Hueneme, CA.

AMSE provides members access to an online dashboard of resources with monthly content themes; nationally-recognized subject matter experts; mentorship opportunities; virtual co-working and group coaching that provides one-on-one support; a virtual curriculum, “Building Your Business the AMSE Way” – 7 Units and 65 instructional video modules with over 60 accompanying downloads that can be accessed from anywhere in the world; and master-classes taught by experts from Amazon Military, USAA, Zapier, Linkedin recorded for replay access on the AMSE Members dashboard. AMSE also partners with organizations that provide discounts to business tools such as Stripe, Wix, Hubspot, Streamyard, Wave.Video, Tailwind, and more.

“Military spouses are natural entrepreneurs because they are bold and brilliant and have the grit the military families need to support their military members,” Moni explains. “And while there have been many efforts to help the military spouse and family ecosystem, we knew there was so much more work still to do.” 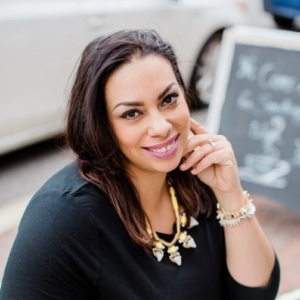 “Every spouse should know that entrepreneurship is an option,” she continues, “but they need support that provides the tools and resources to start, sustain, and scale their businesses.  We’ve built AMSE from our experience living this life, and our organization is giving them the community, tools, and resources to make an impact on their lives and for their families.” 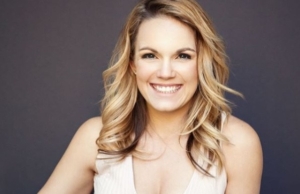 With more than 1,300 active members to date, AMSE recently conducted a survey of their membership to get a more precise profile of military spouse entrepreneurs.  Here’s what they found (see this graphic for more information):

Like all entrepreneur demographics, military spouse entrepreneurs face unique barriers and challenges.  To address those challenges, Moni and Flossie insist that policymakers must act.  Specific recommendations include:

“The most rewarding part of what I do is watching the spouses fiercely believe in what they do and pursue their dream even when the odds are stacked against them,” Moni tells us.  “The fact that our very ‘niche’ and unique organization has grown and touched the lives of over 1,350 spouses in less than a year shows the real need for what we have created here at AMSE.”

Moni, Roy, and their family.

Flossie agrees: “As we’ve continued to build our organization, and build awareness for military spouse entrepreneurship, more spouses have begun to realize that entrepreneurship is not only a viable option as a career path, but also an achievable and realistic one.  Spouses are beginning to feel empowered to take their careers into their own hands and say ‘my time is now.’” 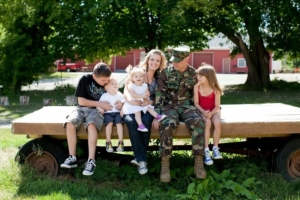 Flossie, Michael, and their family.

“And by empowering our military spouses through entrepreneurship, they are able to build careers, financial stability, and economic impact for their families on their own terms.  They are able to build a career in a field they love, and with the flexibility to work whenever and wherever the military sends them.  This, in turn, helps support happier and stable military families, allowing our service members to fulfill their duty to our country without worry that their spouse is unhappy or unfulfilled.  By supporting our military spouses, we are truly supporting the nation and contributing to the nation’s military readiness.  Our service members will fulfill their service, and then re-enlist because we are supporting the entire family unit.  It’s our duty and obligation to support both sides of the coin – the service member and the spouse.”

To learn more about the Association of Military Spouse Entrepreneurs, visit www.amse.co.