July 20, 2021 marks the fourth anniversary of the establishment of the Center for American Entrepreneurship (CAE), a nonpartisan research, policy, and advocacy organization whose mission is to work with U.S. policymakers to promote and support new business formation, survival, and growth.  What a remarkable 48 months it has been.

For starters, we’ve survived, which is no small feat for any new organization, but especially for a research, policy, and advocacy organization – a unique organizational profile that doesn’t fit neatly into any of the standard categories that are easier to fund.  We are profoundly grateful to our supporters – which include several foundations, the entrepreneurship-minded corporations that comprise our Corporate Advisory Council, and many generous individuals – for sharing our vision and believing in us.

Even more remarkable is what CAE has accomplished in just 48 months.  It’s easy to forget the details, so we’ve collected into one easily reviewable place CAE’s major activities and accomplishments – with hotlinks to the underlying reports, documents, legislation, Op/Eds, and press releases – since we launched in July of 2017.

Two important points should be emphasized as context for the summary presented below.  First, when CAE launched in July of 2017, entrepreneurship was all but absent from the policy radar screen in Washington, DC.  There was no entrepreneurship-focused organization in town, no entrepreneurship caucuses on Capitol Hill, and only a few bills related to entrepreneurship had ever been introduced in Congress.  Second, the summary below does not include the hundreds of meetings with policymakers and their staff conducted by CAE’s team, which is the hard, day-to-day blocking and tackling of trust-establishment and relationship-building that makes the achievements listed below possible.

Bob Litan – brilliant economist, entrepreneurship scholar, and true force of nature – served as CAE’s pre-launch chair and helped lay CAE’s intellectual and organizational foundations.  Ian Hathaway, my friend, entrepreneurship scholar, co-author with CAE Advisory Council member Brad Feld of “The Startup Community Way” (the most important entrepreneurship-related book in decades), and current board member, co-founded CAE and was an invaluable influence and sounding board in the early days just before and just after CAE’s launch.

Sincere thanks to the members of CAE’s remarkable Advisory Council and Board of Directors for their time, energy, expertise, guidance, and support for what was, in July of 2017, more of an idea than an organization.  No part of what follows could have been accomplished without all of them.

And very special thanks to our first two board chairs – Blake Patton, CAE’s first chair, and Rebecca Lovell, our current chair – for their leadership and critical contribution to CAE’s success to date.

Finally, my thanks to CAE’s day-to-day team that makes all we do happen: Al Simensky, Chris Walling, Kevin Ross, and, most especially, Katie Allen, my friend and partner in crime who took the personal and professional risk to launch CAE with me four years ago, has endured all the anxieties and uncertainties of this entrepreneurial venture, and has contributed importantly to everything CAE has accomplished.

Simply put, in our first 48 months underway, CAE has succeeded in raising entrepreneurship to the very highest levels of policymaking in Washington, DC, despite very challenging circumstances that have included funding challenges, historically intense political polarization, and a global pandemic.

With policymaker interest in entrepreneurship now clear, an Entrepreneurship Caucus established and active in both chambers of Congress, many significant pieces of legislation pending, and the urgent need to accelerate economic growth and job creation following the Covid-19 pandemic, CAE has an unprecedented opportunity to make progress on a wide range of issues critical to American entrepreneurs and startups as never before, with the aim of building a stronger, more resilient, and more inclusive U.S. economy.

To help us capitalize on that unique opportunity, CAE recently created the American Entrepreneurship Policy Coalition.  After reviewing the summary of our activities and achievements below, I hope you’ll consider joining our efforts by becoming a member.

CAE co-founder and board member, Ian Hathaway, presents with co-author, economist Richard Florida, at NYU Law School regarding their report “The Rise of the Global Startup City: The New Map of Entrepreneurship and Venture Capital,” October 5, 2018. 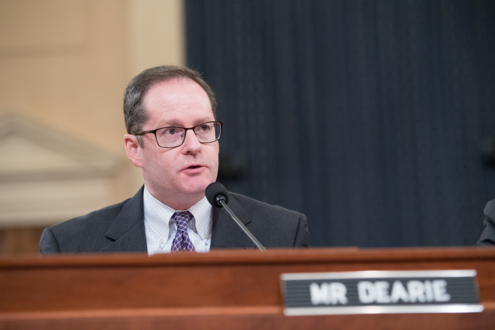 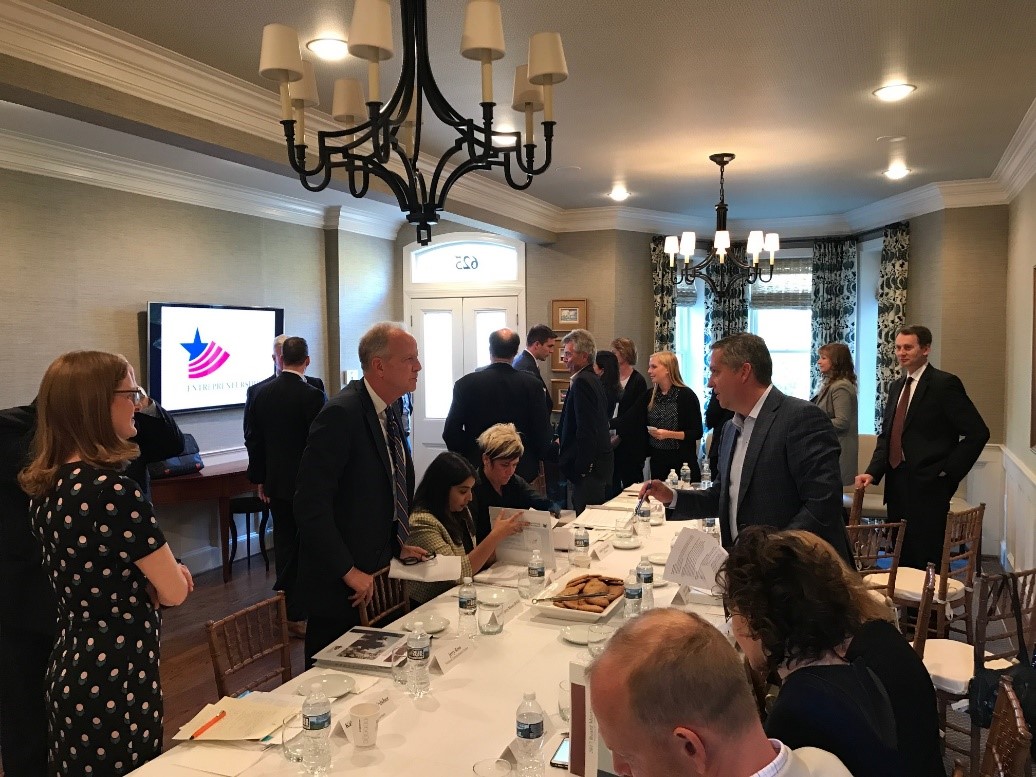 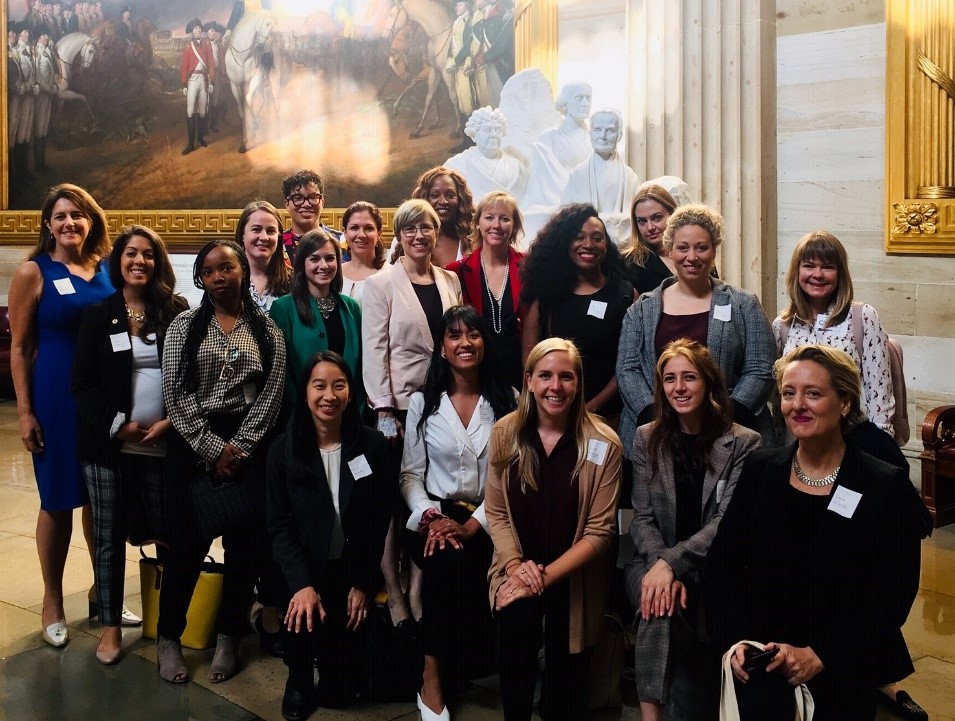 Women founders from all across the country pose before the monument to women’s suffrage pioneers Lucretia Mott, Elizabeth Cady Stanton, and Susan B. Anthony, in the Capitol Rotunda before a roundtable with the Senate Entrepreneurship Caucus, September 24, 2019. 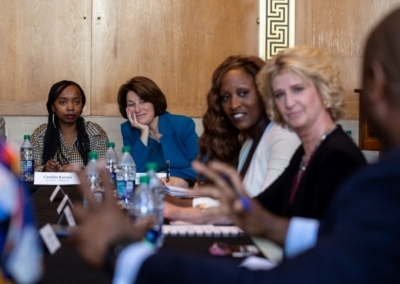 Members of CAE’s board of directors hear from Rep. Derek Kilmer (D-WA), Chairman of the House New Democrat Coalition, October 23, 2019.

In addition to our standard entrepreneur roundtables, CAE also conducted a roundtable on July 28, 2020 with Detroit-based women entrepreneurs and Martha Miller, Director of the SEC’s Office of the Advocate for Small Business Capital Formation on access to capital challenges, and another on December 21, 2020 with SBIR-recipient entrepreneurs from across the country and senior staff at the Small Business Administration regarding ways to improve the SBIR program.